Our city’s planned flagship protected bikeway is planned to be built on 3rd Avenue South this summer. There have been some setbacks after the project was approved, and at last night’s (Feb. 16th) Bicycle Advisory Committee’s engineering subcommittee meeting, we got an update on 3rd Ave S. Here are some of the key points:

Here are four new key elements of the project you should be aware of:

1) Zebra striping for pedestrians has been determined not to be within the scope of the project, though city staff are continuing to look at this and troubleshoot ways in which to make the pedestrian’s – and consequently, the cyclist’s – experience better.

2) The intersection of 3rd Ave S and Washington Ave S is key, because Washington is going to have our city’s first off-street cycle track, to be completed in 2017. One matter of concern that the Minneapolis Bicycle Coalition had inquired about was the right-hand turn lane on the northbound stretch of 3rd as it approaches Washington. The current plan has a sharrow, which the Coalition did not think was great for car or bike safety. As it stands, the city and the county (Washington Ave is a county road) regard this intersection as a “critical intersection” to the flow of vehicles throughout all of downtown, so removal of the left-hand turn lane to accommodate a more protected facility instead of the sharrow is not possible. However, the city sought and was granted a variance from the State, so now the left-hand turn lane and the through lane for traffic have been narrowed down to 10’ each. This will bring down vehicle speeds and improve the intersection, however slightly. It has the added benefit, though, of allowing the inclusion of a protected bike lane on the southbound side of the street, which hadn’t been there previously. 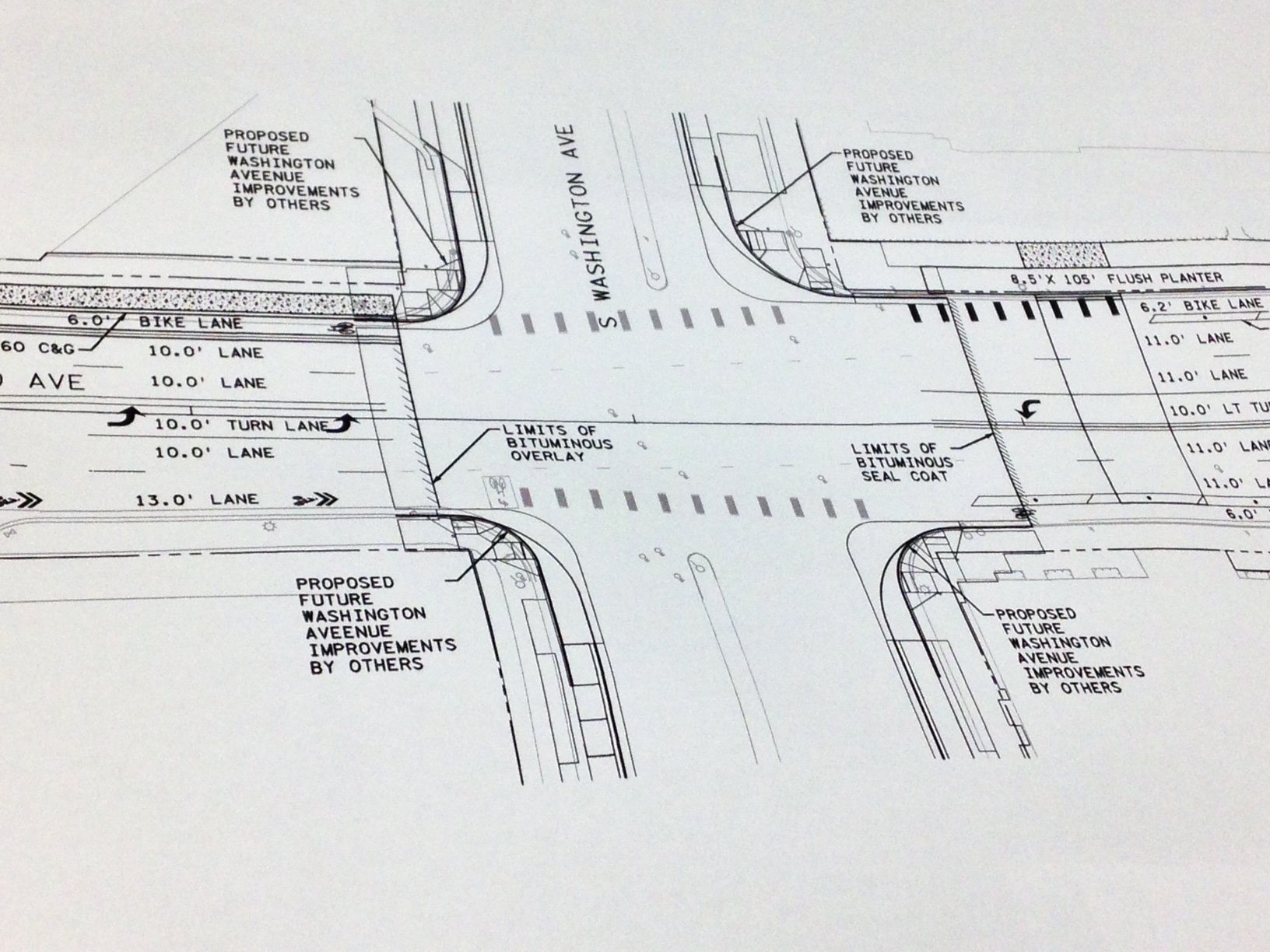 3) One of the other greening options that had been proposed was to remove the parking bay on the west side of City Hall, along 3rd between S 4th St and S 5th St. The city determined that removing the parking bay and installing planters there is not feasible, because there is an areaway under the parking bay that cannot handle the weight of planters. As was pointed out at the meeting, though, neither should it be able to handle parked cars. So it was proposed that the city investigate the removal of the parking bay and the installation of sidewalk panels. This would make the bike lane safer by eliminating cars crossing over it to access the parking bay, it would help better define the cyclist’s experience when traversing the LRT tracks and resuming northbound travel on 3rd, it would have the added benefits of making the area less structurally challenged, and of making the sidewalk space more pedestrian-friendly – and consequently more useful for those with disabilities. 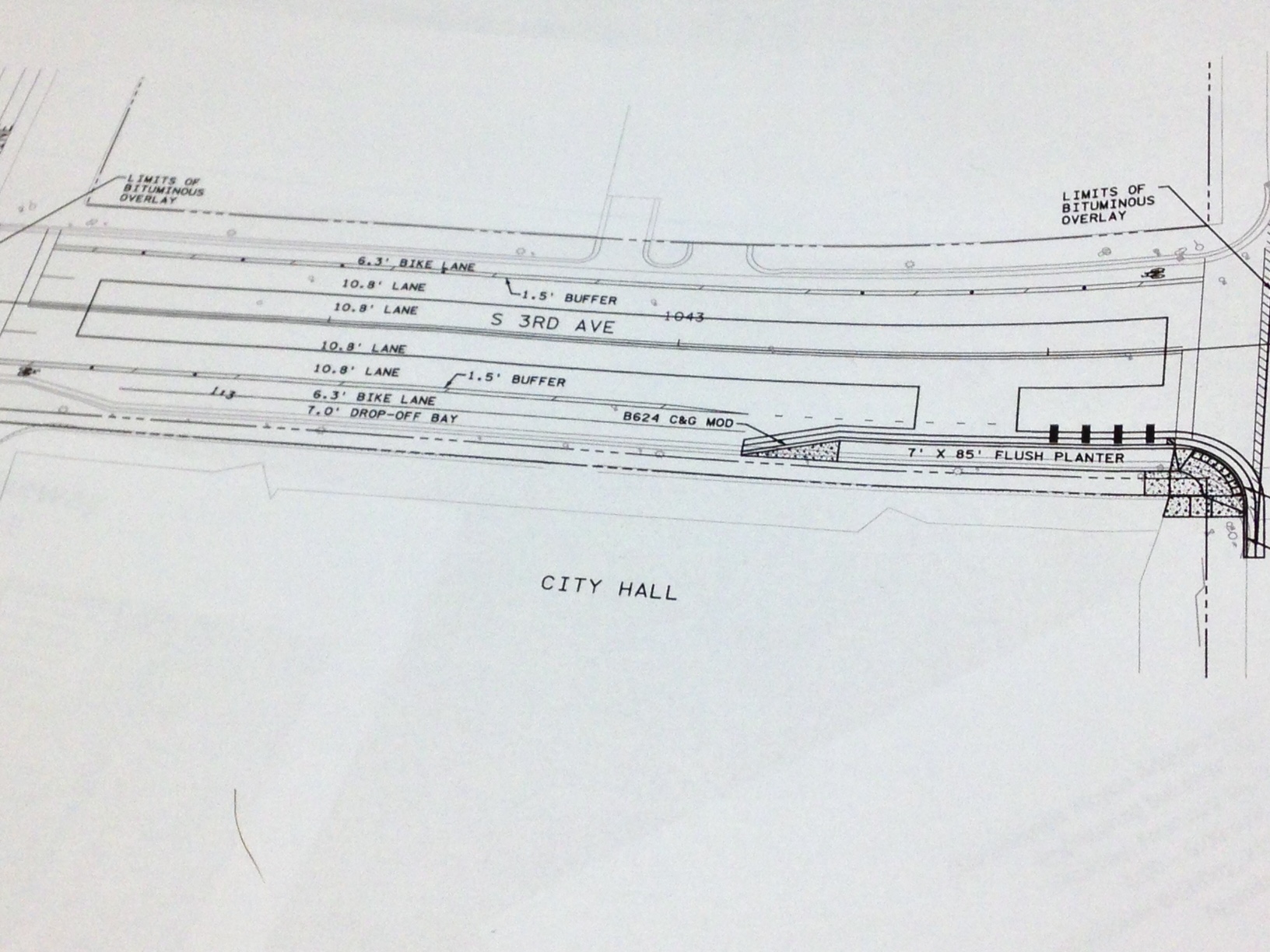 4) One minor concern that has been cleared up: there had been some rumblings that the Convention Center might have taken issue with the removal of parking along its stretch of 3rd (between S 12th St and S 15th St), as there are sometimes buses parked there. As it turns out, that is not a bus loading or parking area, but rather a bus staging area, so the impact on the Convention Center is minimal.

It's likely that the project may go to final vote in the next couple of weeks, so if you haven't contacted your City Council Member to let them know why you support this project, please take a moment to. Need to find out who your City Council Member is? Click here. Overall, the 3rd Avenue South protected bikeway is shaping up well, and we look forward to seeing how plans evolve over the next few weeks.