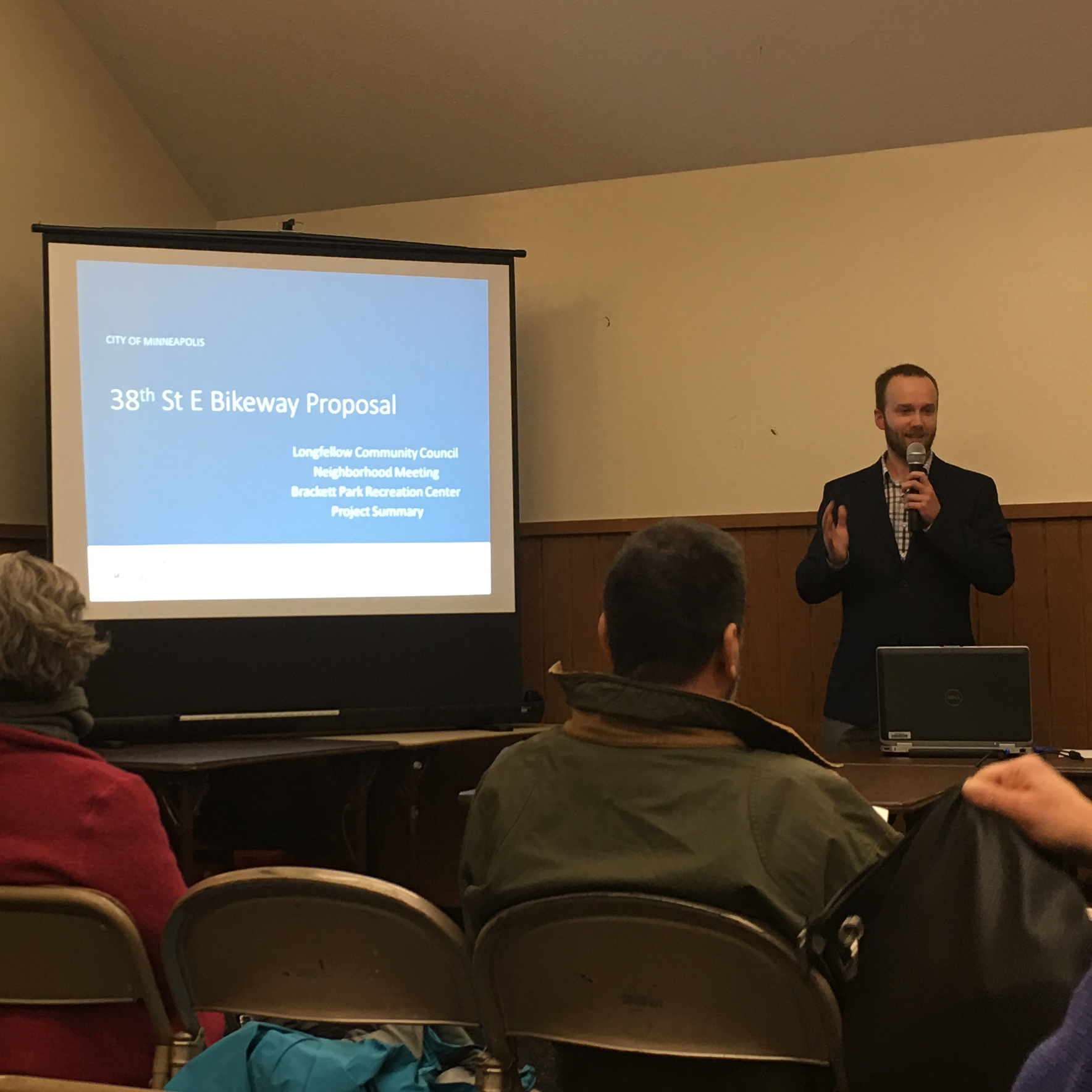 Last night the Longfellow Community Council hosted a community meeting to bring together business owners, City of Minneapolis Public Works staff, and neighbors to discuss the proposed bike lane on 38th Street E between Minnehaha Avenue and West River Parkway. The Longfellow neighborhood currently has the largest gap between bikeways of anywhere in the entire city (no dedicated bikeway between the Midtown Greenway and Minnehaha Park - 42nd St is mostly sharrows, which do nothing for safety). Bike lanes on 38th Street can change that. The route is included on the Minneapolis Bicycle Master Plan, and is scheduled to be resurfaced next year, so this is a great opportunity to add bike lane striping as part of that larger project.

Panelists at the meeting included a representative from Public Works, a member of the Longfellow Community Council’s Neighborhood Development and Transportation Committee, a business representative there to represent the businesses at the 42nd Ave node (Mother Earth Gardens, Riverview Theater, and Riverview coffee shop specifically), a resident and cyclist who lives on 38th St, and a Minneapolis Bicycle Coalition representative. There was a lot of neighborhood interest in the meeting, with over 60 people in attendance in the audience.

Public Works staff began by offering what they called a "compromise" solution, which would restore parking in sections of the route near businesses by cutting off the bike lane and forcing cyclists to merge back in to traffic for a half block. Public Works staff met with business owners before the public meeting, and changed the project based on business desire to maintain parking in specific areas on the route.

Staff admitted that the design was “not ideal” for bicyclists, but felt that they had to balance business parking desires with the safety of a non-interrupted bikeway. A non-continuous design that forces bikes to weave in and out of a general traffic lane to avoid parked cars is inherently unsafe, and puts the safety of people on bikes on the line in exchange for a few extra short-term parking spots.

In many ways, this project is one of the first tests of Minneapolis’ new Complete Streets policy, and unfortunately Public Works is failing that test. They started the meeting by bringing a “compromise” design that puts bicyclists and pedestrians at risk in order to preserve a small amount of on-street parking for a few vocal businesses. The initial design of continuous bike lanes was not presented as an option, and it appears that this revised design is what Public Works staff hope to move forward with.

The strongest opposition to the bike lanes have come from a handful of local businesses on the route who are facing reduced parking to accommodate the bicycle facilities. The business representative on the panel and another in the audience all professed to love bikes and considered themselves very bike-friendly businesses, however they preferred to keep safe bike facilities off of their street and instead wanted them shifted to neighboring streets, such as 42nd Avenue, 4 blocks away. Even after being presented with compromise designs by Public Works that put in 4 parking spots by the coffee shop on the street and 11 more at the 42nd Ave node, the business representatives were still opposed to the idea of bicycle facilities on 38th Street.

The City did do a parking study on the corridor in advance of the design being pulled together, finding that on most blocks parking utilization was less than 20% on average (blue bar lines on "Parking Considerations" chart shown). Given that parking is currently only allowed on the south side of the street for much of the route, that is a very small number of cars being parked on average. The biggest parking concerns from businesses included a local coffee shop that wanted to accommodate “grab and go” coffee runs (and felt that side street parking was inadequate), and the businesses at the 42nd Ave node that were concerned about truck deliveries and overflow parking if there was a large event at the Riverview Theater.

We certainly recognize the importance of local small businesses and want them to be successful. In other places where parking is scarce, we have compromised to find a balance. But here, parking isn't scarce. We would support a different parking arrangement like providing short-term parking spots on streets adjacent to businesses like the coffee shop at 37th Ave. But it's hard to feel that business opposition is anything more than fear of change given the regular availability of parking in the area. We are especially frustrated that they have even opposed this "compromise" that maintains all parking near businesses and pushed for an alternate route. That opposition clearly calls into question their consideration of other community benefits like safety and access. The City, however, has responsibility to consider those benefits.

In the end, there are many things to like about this project. Improved pedestrian infrastructure with high-visibility crosswalks will be put in at a number of intersections, particularly around Howe School. The bike lane will connect a Blue Line LRT stop across Hiawatha Ave all the way to the river, providing an important connection for bicyclists. And the project overall should help calm traffic, making 38th a safer street for all users. But at this point we are not supportive of a "compromise" design, and find it unacceptable that Public Works would propose a design that goes against the directives of the Minneapolis Complete Streets policy, against best practices for bike facilities, and puts the lives of bicyclists and pedestrians at risk in order to preserve a small number of parking spots. It is disappointing that Public Works modified the initial design before bringing it to the community based on a small number of vocal businesses, and are now presenting the community with this considerably less than ideal option. The safety of all road users has to be taken into account when we are designing our streets, and this current proposal fails to do so.

There is still time to be heard on this! If you have feedback on the project, please send it directly to Council Member Andrew Johnson, who will be making the final decision on this street project. You can also send your feedback to the Public Works staff working on this project, and fill out a survey by the Longfellow Community Council on your preferred design.