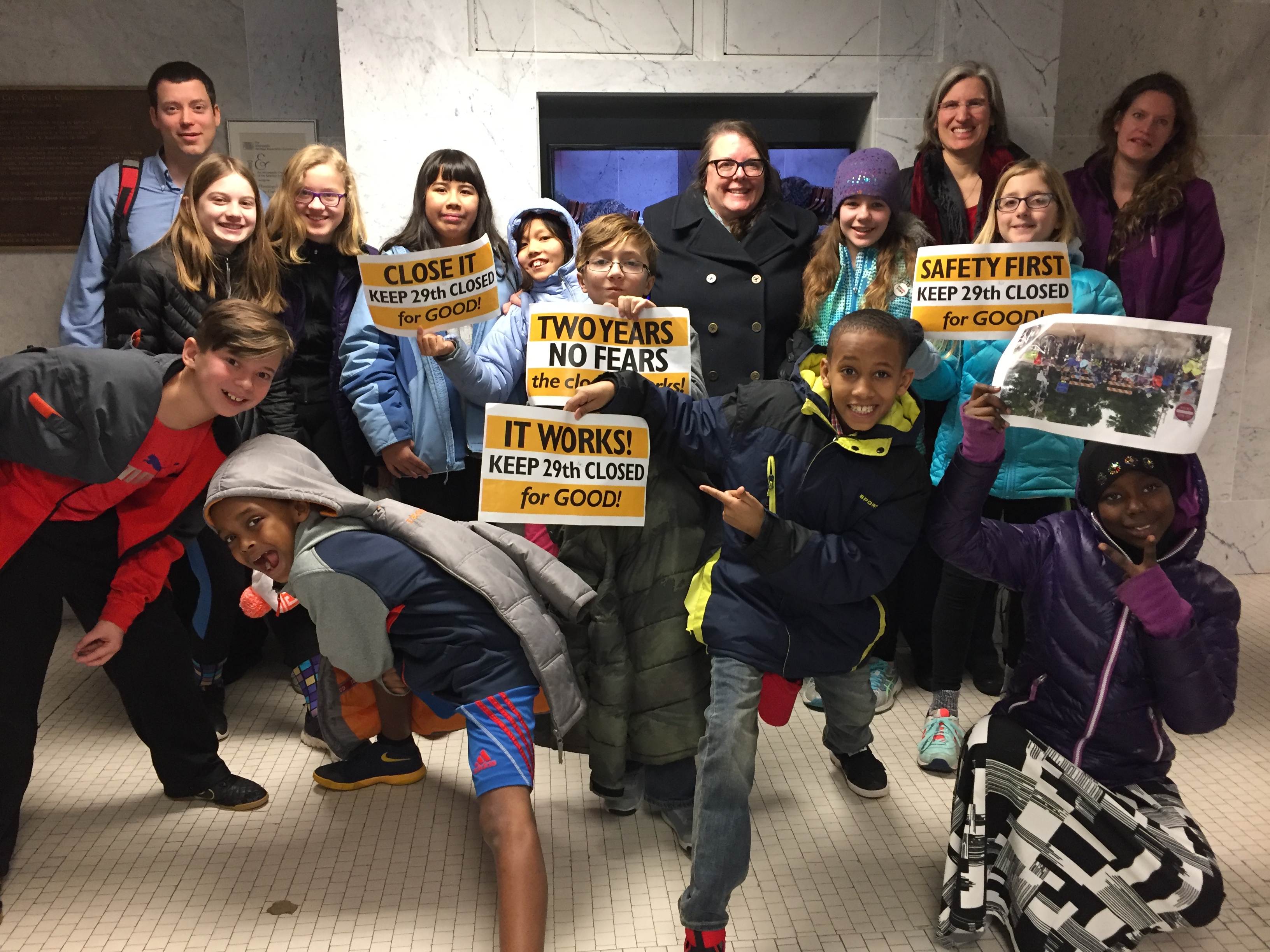 I’m pleased to report that the City of Minneapolis has decided to close 29th Avenue at the Midtown Greenway for good. The community has been enjoying the safety benefits of a test closure for almost two years. On the morning of January 31, a group of students, parents, and local residents from various blocks of 29th Avenue attended the City’s Transportation and Public Works committee to watch the discussion. After the committee voted to approve staff’s recommendation to keep 29th Avenue closed, the delegation from Seward applauded staff and council members.

This outcome would also not have been possible without the good work of Forrest Hardy and his colleagues in Public Works. Public Works staff were excellent partners in creating the Seward Safe Routes to School Plan, and even more importantly, they are committed to carrying out the plan’s recommendations. Before the ink was dry on the document, Forrest and his colleagues worked on two different funding proposals to support the infrastructure recommendations in the plan. Thanks to their work, a variety of safety improvements will be installed on 29th Avenue and 24th Street in Seward in the summer of 2017.

I also want to specifically mention another parent and two teachers who have been champions of progress at Seward. By way of background, Seward Montessori School is a public school with about 850 students from Kindergarten through 8th Grade. 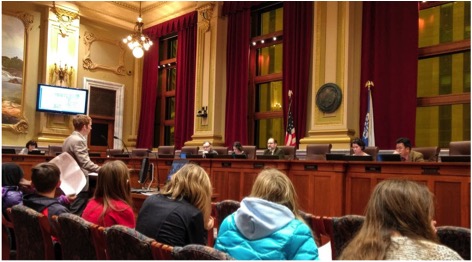 Rolf Scholtz, a parent volunteer, has put an incredible amount of energy into building the Bike Sharks program. (The school mascot at Seward is a shark, thus ‘Bike Sharks.’ Putting a shark on a bicycle has been a fun challenge for Brian Cornell, the graphic designer and parent super-volunteer who also happens to be our PTA president.) Under Rolf’s leadership, the Bike Sharks program has grown the student bike commuter population at Seward to over 100 riders on the busiest days. Dozens more students now have their own bikes thanks to Rolf’s work coordinating volunteers, transporting and repairing bikes, and a partnership with Free Bikes 4 Kids. Rolf has lead group rides to school from the Cedar Riverside towers, growing that event from 3 students to roughly 20 students. Thanks to a partnership with the school district, and thanks to multiple grants that Rolf secured, Seward now has a bike fleet that can be used for traffic safety training and field trips. This is only a partial list of Rolf’s work at Seward, but it helps portray how foundational his efforts have been in making Seward a place where all students have access to bikes and bike education.

Lisa Herr and Jody Volk are both teachers at Seward, and they have each lead many group rides with students. Jody is the school’s health teacher, and thanks to her, every 4th and 5th Grade student has had the chance to learn to bike, and take rides in the neighborhood. Lisa teaches a 4th & 5th grade class, and her students have taken field trips by bike to Minnehaha Falls, Gold Medal Park, and Minneapolis City Hall. On these rides, students learn traffic safety skills, and also get a better sense of the geography of the City, and an understanding of how far they can go on a bicycle.

By mentioning Forrest, Rolf, Lisa, and Jody by name, I’m omitting many people who truly deserve to be recognized as well. All of the successes at Seward were made possible by a small army of parent volunteers, neighborhood residents, and staff from the school, the school district, the City, the County, and neighborhood groups. Everyone involved should be very proud of your work to make Seward Montessori School, and the surrounding neighborhood, a place where students can learn to bike safely.