Adopted unanimously by City Council in April, a new street funding plan, Neighborhood Park and Street Infrastructure ordinance (NPSI), will secure $800 million for the city’s neighborhood parks and streets. Beginning in 2017, the City has dedicated $21 million annually over the next 20 years to bolster the existing budget to ensure Minneapolis streets, mostly built over fifty years ago, remain in fair shape.

This 20 year plan, developed as a part of our Complete Streets Policy, is a recognition that the amount of projected street repairs needed to keep our streets at a “fair” designation will quickly outpace the designated funds. These new funds will include street reconstruction, resurfacing, bikeway projects, sidewalk construction, traffic signals, and street lighting. Reconstruction projects include parking, sidewalks, all right of way, and biking, for example. It will not include general maintenance like seal coating. Currently there is budget for 2-3 miles of reconstruction per year, and the hope is to increase that amount.

In the interest of prioritizing projects for this new source of funding with a racial and economic equity lens, the City has had a series of small meetings to collect community feedback.

I attended an open house at the Central Library downtown, at 4:45 on August 4th (a Thursday). Even on a bike, leaving from my office at Seven Corners/West Bank, it was hard to get there on time with the amount of rush hour congestion and construction traffic, but I got there! And I tweeted during the meeting, which you can expect from me when I’m out and about working.

As you might expect for the location and time of day, the turnout was very modest. I counted about fourteen staff and eleven participants. I perceived people of different ages, genders, and skin colors. I wondered how people came to be at the meeting. I was forwarded an email that tipped me off to the event, but would not have heard of it otherwise. I was happy to see a translator there, but seeing as they were unutilized, I wondered if someone had requested a translator and not showed up, or if they had done outreach to a specific community. I learned that this was the second event, with the first meeting consisting of a small group of stakeholders. A third event was tentatively planned.

The goal of the open house was to come up with a process for prioritizing projects, taking into account racial and economic equity. We can’t improve a system we don’t understand, so the first part of the open house was a presentation about funding cycles, and pavement indexes. To summarize, there are a variety of ongoing funding cycles that have various review processes that get projects “prioritized” for city funds, and the Pavement Condition Index (PCI) is an index used to categorize street surface quality. In order to keep a PCI of 70, a “fair,” rating, the NPSI ordinance was negotiated because our city streets, mostly built in the 1960 and 1970s, are going to quickly approach their 60 year lifespans en masse. There wasn’t much time spent on defining “racial and economic equity.”

These are the questions we were asked to discuss.

What does equity mean relative to city transportation?

The pavement quality throughout the city is the same; no matter where you go it is indistinguishable?
Multimodal infrastructure is available throughout the city so all people can travel easily by any mode?
Average transit dependency or household income are factors in decision-making?
Transportation solutions are tailored to the community and users?
The decision-making process is clear and accessible to all?

What inequities exist in the transportation system today?

Generally, I brought up these topics: 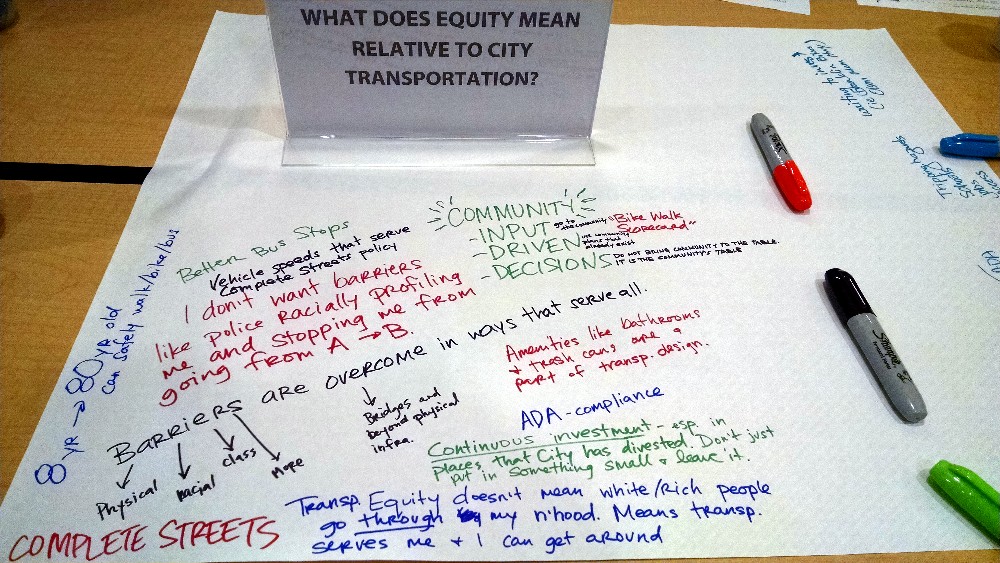 I named tax assessments (even though if you qualify for assessment deferment) as an inherently inequitable because the financial burden is connected to specific projects and initiatives. This might cause an area that just had an assessment to resist upcoming projects due to that burden, even if the project is a needed improvement. Staff pushed back that there were no other viable options for funding improvement projects, and I am not an expert on this subject- does anyone have resources to share with me? I’d like to have more alternative options to present to city staff next time.

I talked with a staff member about metrics for prioritizing projects, beyond identifying Racially Concentrated Areas of Poverty (RCAP). We discussed air quality, noise levels, disability parking permits as ways to prioritize projects. 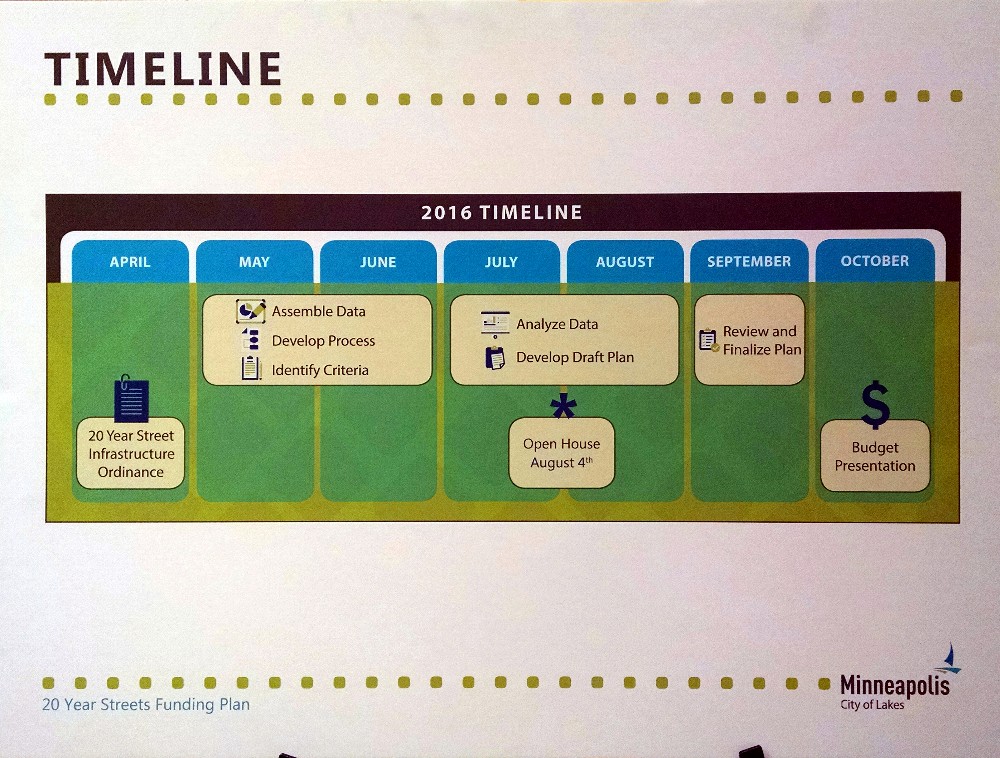 This is the timeline we can expect around this priority process. It looks like the city hopes to have their plan reviewed and finalized in September, to be presented in October. I will be very curious to see how our input is integrated into the plan.  There was mention of a TBD meeting on August 8th.  Unfortunately, I was not contacted (I signed in with my contact info) before August 8th, so if that meeting happened I missed it.  I will report back if I hear of more happenings around this important plan.

I'm glad the city is thinking about how they can make this plan equitable.  I hope that an engagement approach can be found that allows more people to shape this plan, and I hope that this feedback session will be valuable to their process.  I was disappointed with the time and place, exclusivity, and lack of follow up communication from this meeting.  If asked, he Bicycle Coalition would be happy to have discussions with the city about adjusting this engagement process.  I hope we have the opportunity to be involved in the future.

What Would You Add?

Are there other things that should have been discussed, in regard to prioritizing pavement projects over the next 20 years, specifically regarding racial and economic equity?  I will pass any comments on to city staff.